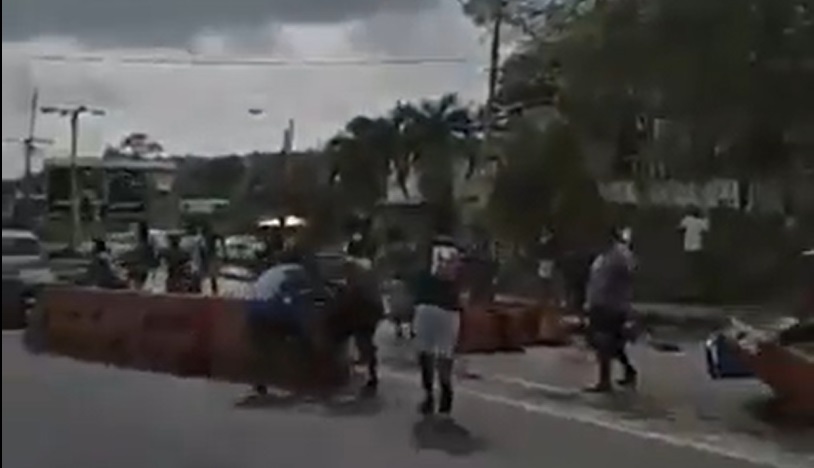 Protest action in Morvant saw the blockage of the Eastern Main Road.

Residents from Second Caledonia in Morvant engaged in day-long protests in their community following the police-involved killings of Joel Jacob and two other men on Sunday.

Up to 4 pm, traffic along the Lady Young Road heading North was backed up due, in part, to protest action. At the Morvant junction on the Eastern Main Road, debris was also thrown across the roadway, causing blockages and a traffic build up.

Chilling cries of residents called on police to provide justice as those gathered believed that the killings were extra-judicial and not at all in keeping with the Trinidad and Tobago use of force policy.

According to reports, some residents lost electricity as burning debris during the protest action damaged power lines in the area.

Public personality representing the TTPS, Inspector Roger Alexander visited the scene of the protest promising that a full investigation would be carried out.

Immediately responding, community activist, Kareem Marcelle called for the offending police officers to be suspended pending the outcome of all investigations.

A Facebook page carried footage of all the day’s activities and demonstrations, however, aside from varying police vehicles and officers, not many authoritative figures were on the scene.

Protesters say they’re willing to continue demonstrating for as long as it takes for Commissioner of Police, Gary Griffith to respond to their calls for justice.

[Photo – Screen grab of video showing the police confrontation with three men, who were shot and killed in Morvant, Trinidad, Saturday – www.looptt.com]

Language and Culture Preservation: The Impact of Creole on Dominica’s Education System

Workers’ Rights are not Quarantined! – Part 2

WE GOT THIS, Waterstreet Boyz